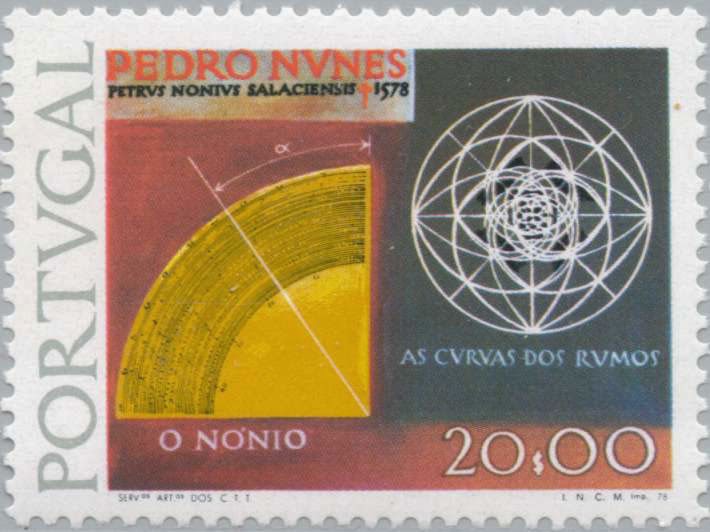 Pedro Nunes was the greatest Portuguese mathematician of the sixteenth century. Born in Álcacer do Sal in 1502, he had Jewish origin, but was never hassled by the Inquisition, perhaps by having the protection of the Court. In 1529, the king appointed him as royal cosmographer, having ascended to the position of master cosmographer in 1547.
In 1544 he was appointed professor at the Coimbra's University, a position he left for retirement in 1562. Between that he had been Master of Mathematics of Infants D. Luis and D. Henrique.
Pedro Nunes developed instruments that revolutionized navigation on the high seas, something of great importance for Portugal in the period. Was one of the forerunners of modern scientific navigation.
The most important instrument that he has invented was the Nónio. From his extensive work stand out from the Treaty of the Sphere and  the Treaty of Spherical Triangles.

CTT - Correios de Portugal had issued in 1978, 500 years after his death, two beautiful stamps with designs of CTT's Artistic Services , with face values of 5$00 and 20$00, with his figure doing calculations with formulas and other mathematical elements and the 2nd stamp with Nónio and curves of direction.


About Pedro Nunes, visit the blog: Iconografia Noniana, with his iconography in Portugal
Published/edited: 15/07/2015